UK ECONOMY’S CREDIT RATING WOULD BE HIT BY BREXIT

A stark warning today: the UK would lose its top-level AAA credit rating if we left the EU, according to financial services company Standard & Poor’s. 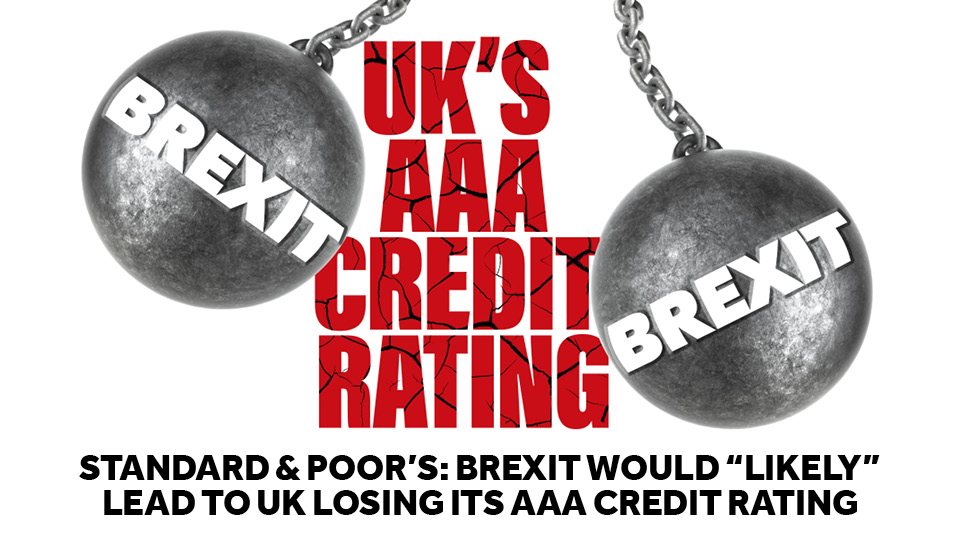 Lucy Thomas, Deputy Director of Britain Stronger in Europe, in response to the warning from Standard & Poor’s that the UK would lose its AAA credit rating if we vote to leave the European Union, said:

“This is just the latest warning from a credit ratings agency on how a vote to leave would be a leap into the dark and could plunge the UK economy into uncertainty.

“A hit to our credit rating would hit government finances, which would mean less money to spend on public services like the NHS. You need a stronger economy to have a stronger NHS, so Britain leaving Europe would put the NHS at risk.

“Consequently, a vote for 'Leave' would likely lead Standard & Poor’s to lower the U.K.’s AAA rating — a rating it has held, without interruption, since 1978. While the U.K.’s rating would likely remain high given its many institutional, financial and economic strengths, the U.K. would lose its place in the increasingly exclusive club of AAA-rated sovereigns.”

"A 'Leave' vote would put pressure on the rating due to the near-term risks it would raise. In this event, we would formally review the UK's rating."

"If there was a vote to leave the EU, we might assign a negative outlook to the rating and use that time (12-18 months) to assess the economic prospects before deciding on the rating," Muehlbronner said. "That might not be long enough to have perfect clarity on policies and arrangements that are put in place, but it should be relatively clear what direction the UK economy is taking." … Muehlbronner said that a vote to leave, known as Brexit, would probably have a negative impact on sterling "which could lead to a reassessment of foreign investors on their willingness to invest in the UK".

A survey of 120 Chief Financial Officers, which included finance directors of FTSE 100 and FTSE 250 companies, by Deloitte found: