Tom Watson: Labour is united as a party & a movement on the question of Europe

Tom Watson MP, Deputy Leader of the Labour Party, gave a speech on why we're stronger and better off in the EU today – here are some of the highlights: 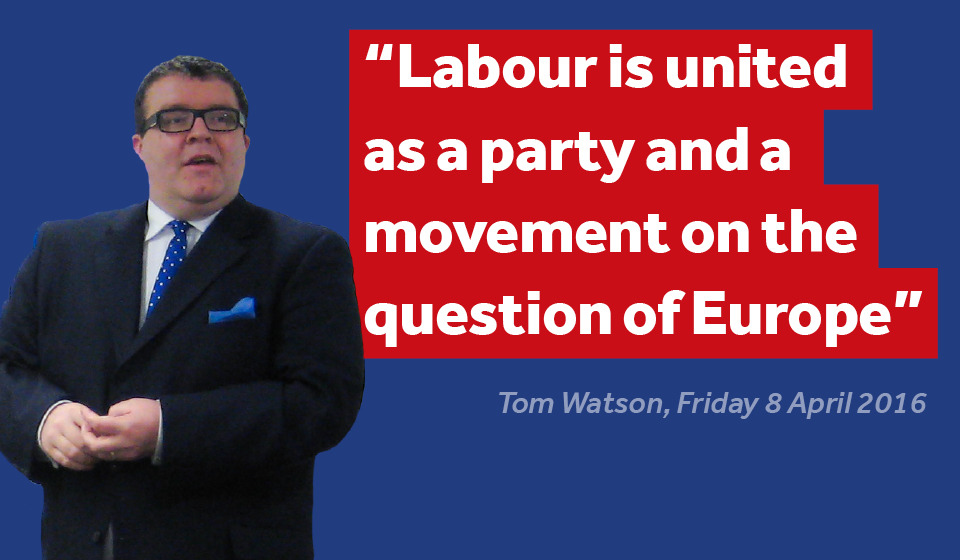 I passionately believe the interests of every single one of those working people are best served by voting to remain in the European Union on June 23.

For me the answer to the question: should the UK remain in the EU? is an emphatic, unqualified and unequivocal ‘yes’.

Let me explain why. Because it really is quite simple.

It is Europe that has protected, enhanced and extended the rights of working people in the UK for a generation or more.

It is Europe that guaranteed a minimum amount of paid holiday; enshrined paternity leave and maternity leave in law; gave part-time agency workers the same rights as their full-time colleagues; ensured that no one working seven days straight should have to work an eighth day without at least 24 hours rest.

It is Europe that passed legislation, which gives workers a 20-minute break for every six hours of work.

The right for part-time workers to be treated in the same way as full-time workers was introduced in 2000 thanks to trade union campaigning in Europe.

A total of 8.5 million people in the UK benefit directly, including just under 700,000 people who work part-time here in the West Midlands.

There is no guarantee that those protections will remain in place if the “Leave” campaigners win the argument and the UK votes to leave the EU.

Labour is united as a party and a movement on the question of Europe – unlike the Tories. 213 of our 232 MPs support a ‘remain’ vote.

TUC General Secretary Frances O’Grady says: “The bulk of the rights at work that matter to us originated in Europe. A Brexit would have massive implications for jobs, rights, and the very fabric of the UK. If you take that floor away, workers will be worse off.”

Tim Roache, the new General Secretary of the GMB, says Europe, although not perfect: “has given us the most progressive employment legislation in the country bar none.”

And Len McCluskey has said, that whilst he wants reforms to the EU,

“it is undeniable…that for millions of UK workers and their families the EU is the best hope for their jobs and fundamental rights. Our communities clearly benefit from the investment and trade links that come with being part of the EU. And our working people are in increasing need of the employment rights that flow from membership. Rest assured that outside of the EU, left at the mercy of a Conservative government, these protections will be swept away.”

Our membership of the EU is not just about guarantees and safety at work, of course.

It’s about the broader economy. There is no doubt that our membership of the EU has had a positive impact on British trade, British jobs, and British business.

And it will continue to do so. I want to live in a country with a sound, modern, innovative manufacturing base.

I want the next generation of British scientists, engineers and entrepreneurs to be able to stand on a strong platform of British manufacturing.

I want an active industrial policy that supports manufacturing of every kind, from our defence industries to the technologies that are being developed to cut carbon.

I want a regional development policy, so that towns like Redcar and Port Talbot are not left to rust, so that we invest in the workers who have built our nation’s prosperity.

I want universities linked to businesses, just as they are here in Coventry and Warwick, so that British graduates have the skills and experiences to compete with their counterparts from Beijing or Delhi.

We have achieved a huge amount by working with our European allies and pushing for progressive reform of the European Union.

We will achieve a lot more if we continue to do that.

But we can only do that by leading - not leaving.