NEWSPAPERS FROM ACROSS THE POLITICAL DIVIDE SAY: VOTE REMAIN 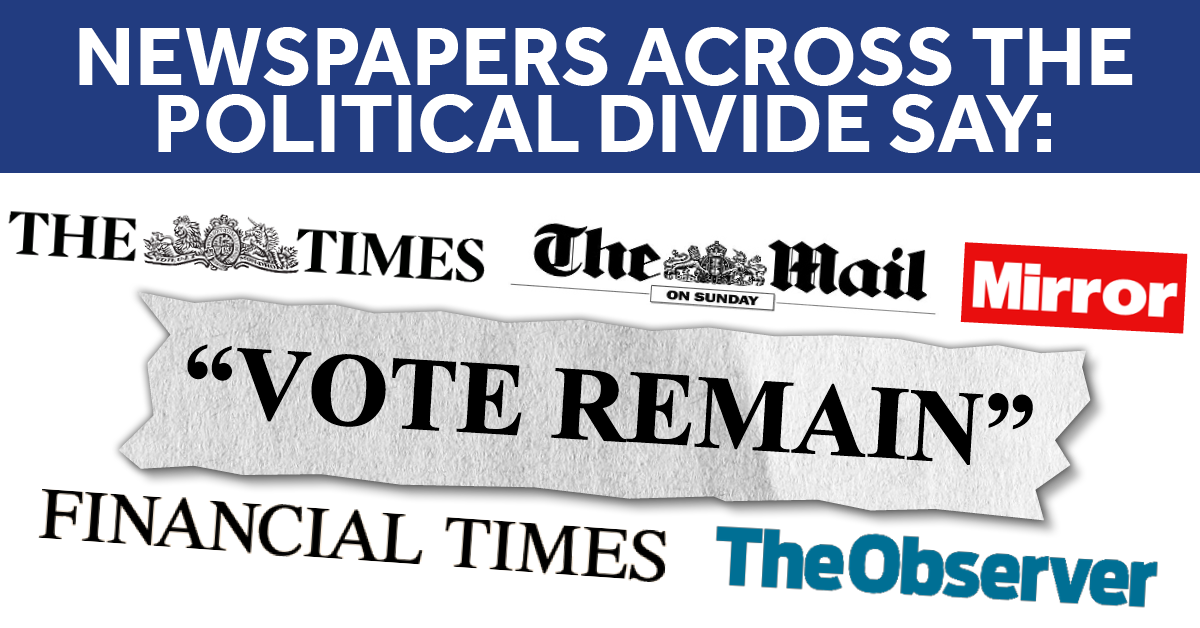 Newspapers from right across the political spectrum are today calling for the British public to vote remain in Thursday’s referendum. Here’s what they had to say.

THE MAIL ON SUNDAY

"The human head knows that, especially in the world we now inhabit, our deepest desires must somehow be moderated to suit the increasingly tough reality of a competitive world in which, though still a great nation, we no longer have the power or the wealth which once allowed us to live in splendid isolation.

Those who would have you believe in the plucky Little England of the past are selling a dangerous illusion.

This newspaper believes that this is not the time to risk the peace and prosperity of our nation.

For modern Great Britain to thrive and prosper we must work with, not against, our European partners; we must keep our seat at Europe’s top table and help shape its destiny; our strong, clear voice must be heard inside Europe, not be shouted from the sidelines.

This newspaper believes in a safe, free, and prosperous future for this proud country. And so we urge you, our readers, not to take a leap into the dark. Vote to remain in the European Union – for an even greater Britain.”

“Despite its many flaws, this paper believes the EU has, without question, been a force for good. It has succeeded in its aim of preventing another European conflict. It has established the world’s biggest single market while preventing a race to the bottom on employment rights. It has brought former satellite states of the USSR within the European fold, nurturing nascent market economies and democracies.

And Britain has been far from being a bystander, watching passively as the EU chalks up its successes. Prime ministers from Thatcher to Blair have played a leading role in the creation of the single market and eastwards expansion. Britain has shaped Europe for the better as much as Europe has shaped Britain.

Outside the EU, our role in the world would be diminished. This matters: not as a throwback to bombastic colonialism, but because, as a significant economic power and force for liberal democracy, Britain has global responsibilities. To turn our back on them would be a dereliction of our duty. Internationalism, co-operation and compromise are the tenets of modern diplomacy. Whether or not we choose to live by them will affect the stability of the world our children and grandchildren inherit.

At its core, the European Union remains a practical expression of the belief that liberal democracies can achieve more acting in concert than they can alone. We must not turn our backs on that.”

It is not true that Britain sends £350 million a week to Brussels. According to the UK Statistics Authority, the actual figure is £136 million. It is not true that EU migration is the main cause of pressure on the NHS. That pressure comes from an ageing population and the rising cost of treatments.

It is not true that Turkey is on a path to EU membership, for all that Mr Cameron was a supporter of the idea until as recently as 2014. Since then, Ankara under President Erdogan has shown decreasing interest in accession, which takes a minimum of 15 years and which France and Germany would veto anyway.

It is not true, finally, that Brexit would answer at a stroke the prayers of those Vote Leave is wooing. This is especially so in Labour strongholds where most social problems predate the EU’s expansion and most immigration is from outside Europe.

A vote for Brexit is unquestionably economically riskier than a vote to remain.

Experts overwhelmingly concur. Paul Johnson, of the fiercely independent Institute for Fiscal Studies, puts the chances of Britain being worse off after a vote to leave at 90 per cent. The Treasury has projected an “immediate and profound” downturn in the short term in the event of a Brexit win, and a 15-year outlook of less trade, less investment and less growth than if Britain stayed in. The Bank of England, the US Federal Reserve, the IMF, the World Bank, the World Trade Organisation (WTO), the Organisation for Economic Co-operation and Development (OECD) and nine out of ten economists polled by Ipsos MORI broadly agree.”

“Brexiteers argue that by leaving it we would regain our sovereignty, what they call getting our country back.

That means going back to our past. You must decide if that past can become our future.

We’ve pooled our sovereignty with NATO because an attack on one is an attack on all and no one suggests we leave that.

We’ve pooled our sovereignty with the United Nations because our decisions are subject to Vladimir Putin’s veto and no one suggests we leave that.

>No international organisation is perfect, but we have yet to find a better way than the UN to maintain relative peace.

The EU is not perfect, but it makes it inconceivable France and Germany will ever go to war again.

Brexiteers now claim we can magic up sovereignty by leaving the international organisation which gives us access to 500 million customers and feeds three million British jobs which go with that.

This referendum is not just about our previous history. Where you put your X on the ballot paper is about making our own history.

It is not about our past, but how we forge our future. And it is a once in a lifetime opportunity.

This is truly the battle for Britain. Make Thursday Victory in Europe Day.”