Treasury analysis: UK families would be worse off if we left EU

Writing in today’s Times, George Osborne discusses the new analysis from the Treasury on the effects of leaving the EU on UK families. 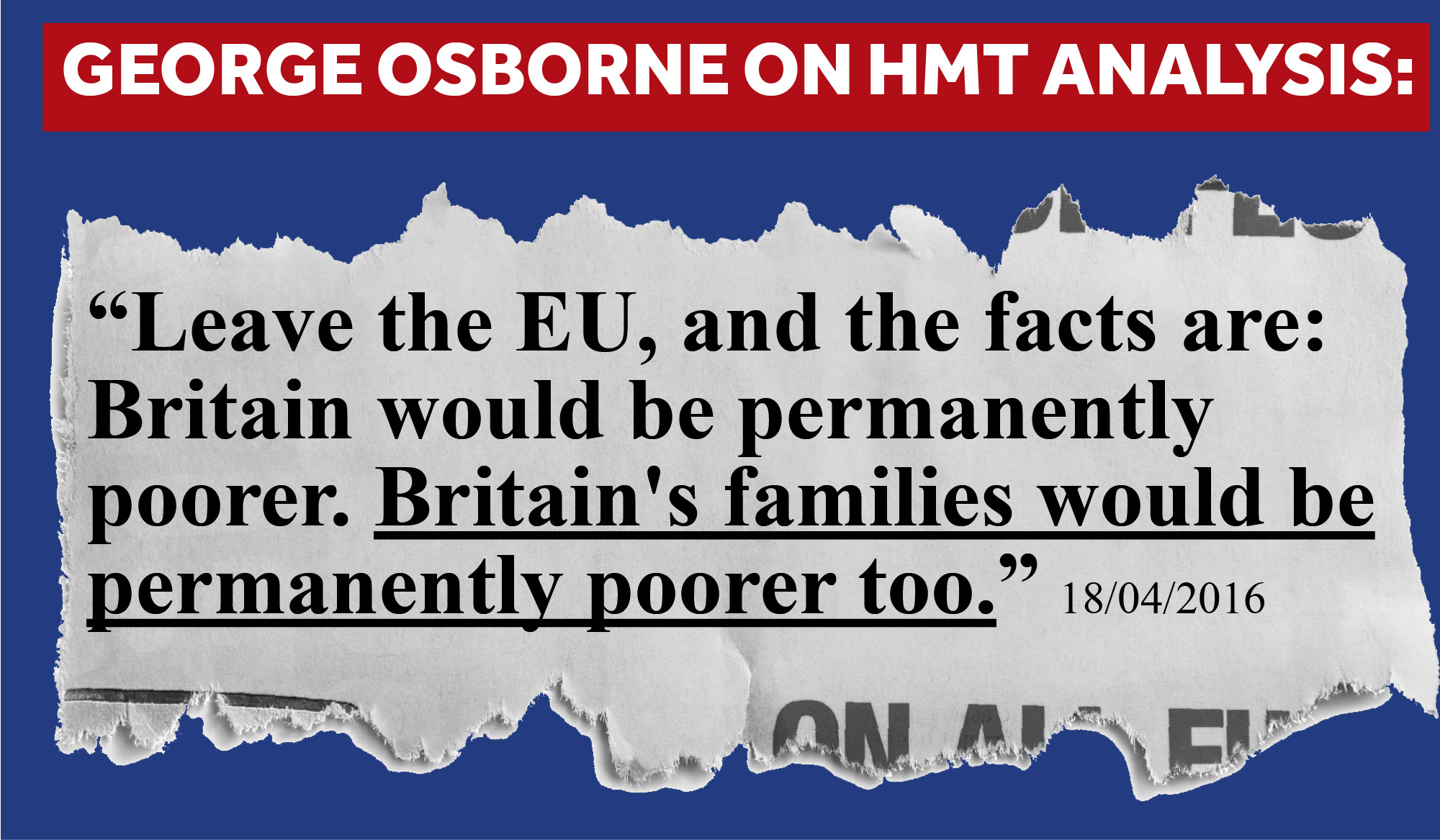 The question facing Britain on June 23 is one of the most fundamental our country has been asked to settle in a generation — bigger than any one politician; bigger, frankly, than any general election.

The outcome will have profound consequences for our economy, for the living standards of every family, and for Britain’s role in the world.

It’s clear from the debate so far that people want less rhetoric and more fact. That’s what we are providing today, as the Treasury publishes a rigorous analysis of the longterm costs and benefits of EU membership and its alternatives.

Put simply: over many years, are you better or worse off if we leave the EU? The answer is: Britain would be worse off, permanently so, and to the tune of £4,300 a year for every household.

Here’s why. It is a well-established doctrine of economic thought that greater openness and interconnectedness boosts the productive potential of our economy. The more we trade and invest the richer we become. That’s because being an open economy increases competition between our companies, making them more efficient in the face of consumer choice, and creates incentives for business to innovate and adopt new technologies.

All this leads to better jobs, higher living standards and lower prices for British people.

The single market is about more than tariffs and quotas — it means common standards, so there aren’t hidden barriers to trade. It means a car manufacturer knows that their cars can be sold without any additional safety checks to European markets; an engineer or an architect can get off the plane in Madrid or Munich and start doing business immediately without people questioning their qualifications; and a mother setting up her business online can sell her products across the EU without having to navigate lots of cross-border red tape.

We help set those common standards, and we’ve been a crucial influence over the years in extending that single market and that global network of free trade. Yet we’ve kept our own currency and control of our borders, so we have the best of both worlds.

The analysis shows that the commitment of all EU governments to free trade and a deeper single market, championed by David Cameron, will over time boost Britain’s GDP still further. That’s a strong, positive reason for remaining and driving on reform.

The question the study today also asks is: does leaving the EU reduce our openness and interconnectedness? Because if it does, that will have an impact on prosperity and living standards.

The Treasury has carefully modelled the impact on trade and investment of all of the alternatives to membership of the EU. There’s the Norway model, where we gain partial access to the single market but we still face custom barriers and we still end up paying into the EU and accepting free movement.

We could rely on our membership of the World Trade Organisation, like Russia or Brazil. Then we’d face tariffs in our largest export markets on everything we produce, from food to cars.

Or we could try to negotiate a bilateral deal like Canada. That’s taken seven years, still isn’t in force, and it would mean the service businesses that make up 80 per cent of our economy couldn’t do business freely with Europe, our farmers would have quotas and the integrated supply chains of our advanced manufacturers would face customs barriers.

It’s a complete fantasy to suppose that there is some radically different other arrangement that Britain could negotiate, where we have access to the single market but don’t accept any costs or obligations of EU membership.

Other European governments have made it very clear that that’s not on offer. And when you think about it for a second, how could it be? How could other European countries give us a better deal than they give themselves?

Those advocating exit have miscalculated their negotiating hand. While 44 per cent of British exports go to the EU, less than 8 per cent of their exports come to us. The Treasury analysis shows that under all plausible alternatives to British membership of the EU we would have a less open and interconnected economy — not just with Europe but, crucially, with the rest of the world.

There would be less trade, less investment and less business.

None of the campaigners for exit can agree on what the alternative to EU membership looks like. They ask us to make a leap in the dark. But let’s take the Canadian-style bilateral arrangement that some prominent ones have suggested as a central scenario.

The economic analysis shows that it would make us worse off to the tune of £4,300 for every household in Britain by 2030. Our GDP would be more than 6 per cent smaller.

There would be enormous costs for our public finances, far outweighing the little over 1p in every £1 in taxes raised that we currently contribute net to the EU. There wouldn’t be more money to spend on the NHS, defence and the like; there would be far less. The conclusion is clear: for Britain’s economy and for families, leaving the EU would be the most extraordinary self-inflicted wound.

I can already predict the reaction of some in the Leave campaign to this Treasury analysis today.

Every time there is a serious intervention — whether it’s from international bodies such as the IMF and Nato or from foreign leaders or successful businesses or respected academic institutes such as the London School of Economics — the Leave campaigners can’t answer the substance so they claim that it’s all part of an international conspiracy called “Project Fear”.

To them I say this: as this analysis demonstrates, there are very good reasons for the British people to be fearful about Britain leaving the EU.

So engage in the issues rather than complaining endlessly about process. This is too important a question for Britain for you to pass on the answers. Every time you cry wolf about Project Fear, you only expose how weak and friendless your case is.

To be fair, there are some who know that there’s an economic cost to leaving the EU but think that £4,300 a family is a price worth paying. I don’t agree with that but I do agree that this debate isn’t just about the money. If anything, I feel as strongly about the non-economic issues at stake.

Within the lifetime of my parents, our continent has fought itself to death. In my lifetime we’ve had civil war in Yugoslavia and now conflict in Ukraine. Don’t underestimate the value of the institutions we created to enforce peaceful co-operation between the countries of Europe.

And don’t today underestimate the threats we in the West face to our security and our values, from Putin’s aggression to the brutality of Islamist extremism.

Before you vote, ask yourself these questions: how are any of these threats better confronted if Britain goes it alone? How is the West stronger if we leave? Isn’t it striking that every one of our closest allies and friends, who stood by us in our darkest hour, are urging us to remain?

The history I studied taught me that every time Britain has withdrawn from the affairs of our continent and thought that we could retreat to our island fortress it has been a disaster for us and a tragedy for Europe. It’s precisely because we’ve been an outward-looking, free-trading country that engages with the world that we’ve had a greater impact in shaping our planet and its destiny than almost any other.

Pulling up the drawbridge and unilaterally withdrawing from the world is so out of character for the British. Our allies and trading partners would look on such a decision with bemusement and dismay. That’s why the case for Remain is a powerful and patriotic one.

I love this country, am proud of what it has achieved and am fiercely ambitious for its future. I don’t want us to be like Norway, Canada, Switzerland or Russia, as the Leave campaign suggests. I want Britain to be Great Britain: engaged in the world, championing free trade, attracting foreign investment, continuing to prosper. We should not withdraw from Europe but shape Europe to our national interest. We are builders, not wreckers.

The hard-headed economic analysis and the sense of who we are as a nation lead to the same conclusion. Britain is safer, stronger and better off inside a reformed EU.

George Osborne is chancellor of the exchequer