As Chair of the Scotland Stronger in Europe advisory board, I am delighted with the enthusiasm that volunteers from across the country, from Orkney to Dumfries, have shown in taking the case for Remaining in the EU onto the streets of Scotland.

In the next few weeks there will be many more streets stall, evening coffee meetings, opportunities for people who are still undecided to talk and connect with the campaign.

We hope people will engage and listen to why it's so important that we vote to remain in the EU - a vote to stay is not a vote for more of the same, it's a vote for continued peace and prosperity.

Europe means different things to people across Scotland, but we should be passionate about how important it is to vote on 23 June.

A vote to remain whether it be for economic reasons, for trade or for strengthening our alliances with our closest neighbours, is a vote for hope for future generations.

We must not be complacent or apathetic - Europe matters.

I am confident that Scotland do the right thing by voting to remain - the bigger the 'in' vote in Scotland, the more we can deliver 'in' UK wide.

The economic case for remaining in the EU is becoming clearer each day but for me, Europe means something far more than economic prosperity.

Economic prosperity relies on peaceful societies, on peaceful alliances, on countries who share similar values and ideals about human flourishing and human dignity.

Of course we are not perfect, but as we look around the world where there are so many conflicts, a world of vested interest, the solidarity we enjoy in Europe, the ability to make a difference when we come together - this should never be taken for granted.

For this who wish to leave the EU, immigration and security are often identified as reasons for leaving. We are told we should take back our borders. But we already have control of our borders, and immigration from Non-EU countries is a consequence of a conflict that we alongside our European neighbours have a moral duty to resolve.

What happens in the caves of Yemen, the squares of Cairo affects the streets of London and the boulevards of Paris - we cannot and we should not run away from the global problems; the world is full of colliding values and competing interests.

The UK in Europe has an opportunity to show courage and moral leadership to the rest of the world. 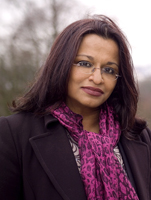 For me the EU is not only the biggest trade bloc, it means a legacy of peace and security, for prosperity and for building strong connections with our neighbours.

Like many, I am from a generation which has enjoyed the best of Europe.

The vote to remain 'in' will ensure that the next generation will continue to build on all that Europe has to offer.