David Miliband: Why Brexit would be nothing less than an act of political arson

Former Foreign Secretary David Miliband has today written an article on how Brexit would mean "throw[ing] away our power and our values.".

See the full article below:

Here is a strange thing: the European Union has become a far better deal for Britain in the last 30 years, yet public support has ebbed. As the gains have multiplied, so cynicism has grown. For those of us committed to Britain’s place in Europe, the referendum campaign is the last chance to make the case, and we must do that with passion and patriotism, because neither belong on one side of the argument. 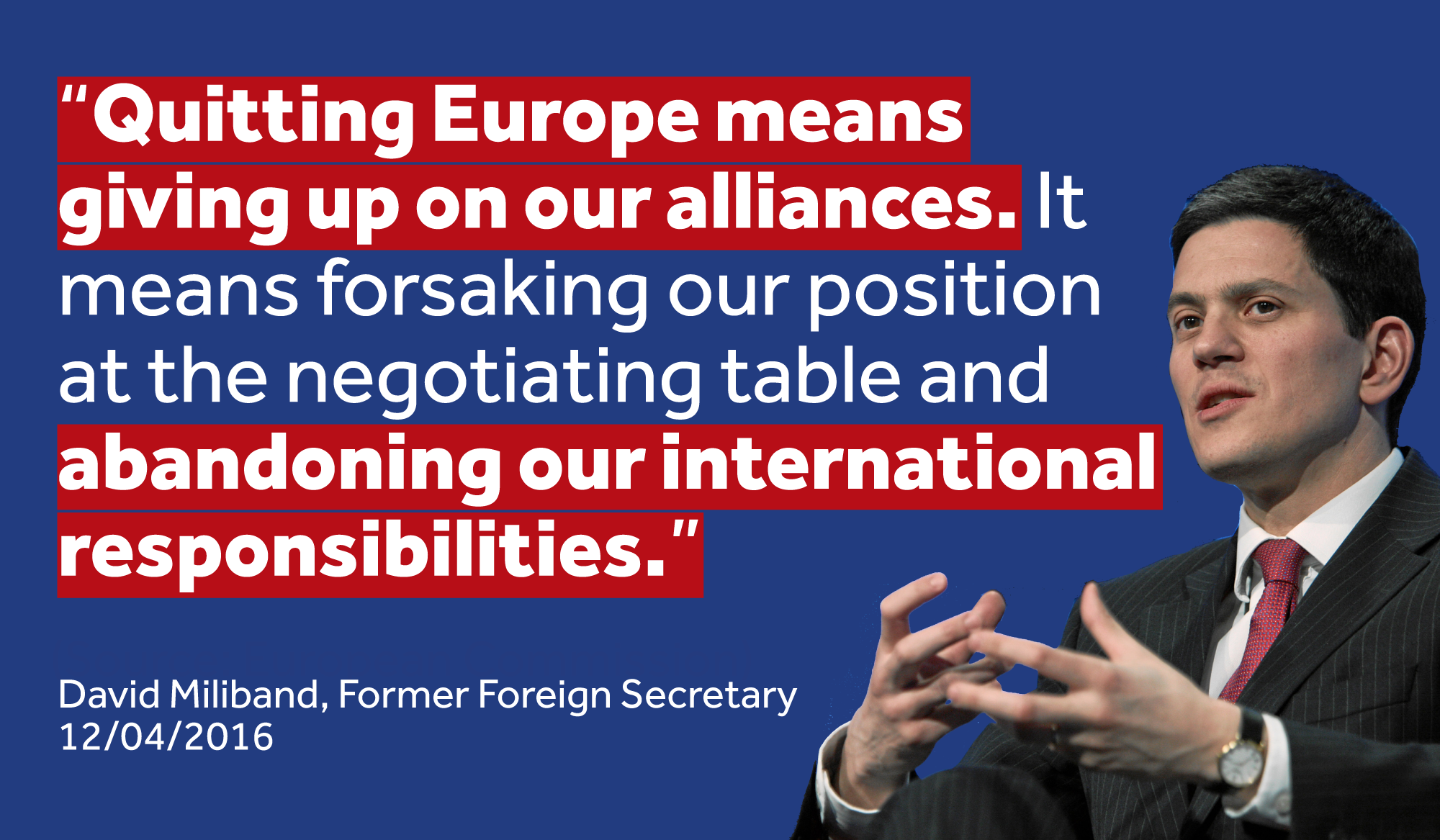 The case for Britain’s EU membership is not just about material wealth or the strength of our borders. The character of our country and our place in the world are on the ballot paper in June. The stakes could not be higher for a very simple reason: the referendum in Britain is taking place at a time of major international ferment and challenge. For Britain to quit Europe would be an unprecedented act of political self-destruction.

Not only would it have a devastating impact on Britain’s strength in the world; it also threatens a domino effect on the institutions that help make the world a more secure, prosperous and stable place. We are living through an unprecedented challenge to the institutions and values that have advanced human security, prosperity and dignity over the last two generations. These institutions, including the EU, are far from perfect and they need reform, but they uphold the core idea of an international order based on clear rules.

The challenge is about security. Jihadism is a threat to life and limb from Belgium to Nigeria to the Middle East and South Asia. But there is a wider assault on the democratic norms of the post cold-war settlement. International humanitarian law is being flouted; global economic institutions are being tested to the limit; Russia has set itself up as a pole of attraction for all those frustrated by the missteps of the west; Donald Trump is arguing that Nato is obsolete.

The result is that the global commons – the physical, legal, environmental, even moral space which we hold in common– is under threat as never before at a time when the need for global cooperation is greater than ever before. So the “British question” is not only one of what we get out of Europe. It is also one of whether we want to shore up the international order, or contribute to its dilution and perhaps even destruction.

Britain cannot solve these problems alone. But we do more in and for the world than our modest size would suggest. At our best, we lead in defending the values, building the structures, and defining the substance of international cooperation. Successive governments have committed us to being an outward-looking country that has helped build the rules-based international order.

If the world is increasingly divided between firefighters and arsonists then Britain has, for centuries, been a firefighter. This is no time for Britain to join the ranks of arsonists, and there should be no doubt that Brexit would be an act of arson on the international order.

Our history, while great, plays a diminishing part in Britain’s standing. A growing measure relies on our being unafraid to grapple with the problems, and seize the opportunities, of an interdependent world. Our status as a permanent member of the UN security council, for example, is rooted in postwar history. We cannot claim our seat because of our size. However, we can claim it because of our contribution to global order.

At the heart of our British success story in the postwar period – not just as a fringe component or some add-on extra – has been our membership of the EU. Europe is not an alternative to a global Britain; it is the foundation for our role and reach internationally, which is good for us, and I would argue good for stability and security around the world.

Far from limiting or diminishing us, the EU multiplies British power, ideas and values in very direct ways. In defence policy, the EU allows the UK to mobilise international action, for example reducing Somali pirate attacks. In diplomatic policy, the EU was central to negotiating a resolution to the Iranian nuclear programme. Our world-leading development and environmental clout are multiplied by our membership of the EU, which drives pioneering good practice on a global scale.

Don’t just take my word for it, or even the words of our allies in Europe. Across the Atlantic, Barack Obama, Hilary Clinton and John McCain are all agreed that the special relationship is enhanced by a strong UK in a strong EU. Leaving would weaken both. In the big emerging economies, President Xi Jinping of China and Prime Minister Narendri Modi of India see Britain’s membership of the EU as pivotal to the deepening of our relationship with their respective nations.

Quitting Europe means giving up on our alliances. It means forsaking our position at the negotiating table and abandoning our international responsibilities: unilateral political disarmament.

All thrown away in a vote to leave. For what? For a cold, hard lesson in the demon of hubris, born of delusion that the world owes us a break. It would be an act of economic, political and diplomatic self-harm – a tragic miscalculation which weakens us, our friends and the international order on which we depend. This is not Project Fear, it is quitting Europe which is Project Fantasy.

It is utterly fantastical to claim, as leave campaigners do, that the economic, security and diplomatic advantages of EU membership can be replicated, let alone improved upon, outside. The most central argument for leaving – that it increases control – is also the most wrong-headed. This is particularly the case in respect of foreign policy, where every country has a veto. In this field, there is no loss of sovereignty. The benefits of cooperation are all upside. And in other areas, we pool sovereignty to get a bigger say on issues, like the environment or the single market, that we cannot control on our own.

The international system is complex, with many institutions living side by side. Europe is a stabilising, unifying factor in that system. That is why people like the US trade representative warns that the climate is cold outside, and the German finance minister says a vote to leave would be a “poison”.

Think of the big questions that need to be tackled: whether global capitalism has more bust than boom; whether enlightenment values can be sustained in the face of global pressures; whether the climate crisis is past resolution. All need effective international collaboration that is regional as well as global. We would not dream of leaving the UN or Nato, so how can we be so blasé about our place in the European Union.

Ask who will be celebrating the morning after a British vote to leave? Not the leaders of America; Germany; France; the rest of the EU; China; India; Australia; Canada. No, alongside Boris Johnson and Michael Gove, it will be Marine Le Pen, Vladimir Putin and perhaps Donald Trump.

Vote leave if you want to weaken the institutions on which we rely, make it harder to crack down on rogue states, curb global emissions and deliver effective aid to the poor. If you want to strengthen Britain and strengthen the forces for stability, security and social justice in the world, vote to remain. Britain needs Europe and Europe needs Britain. That is the positive, patriotic, passionate case for European cooperation, with Britain at its heart, in the 21st century.