Yesterday, a speech by John Major warned about the consequences of the UK leaving the EU. Below are some of the highlights from this important speech: 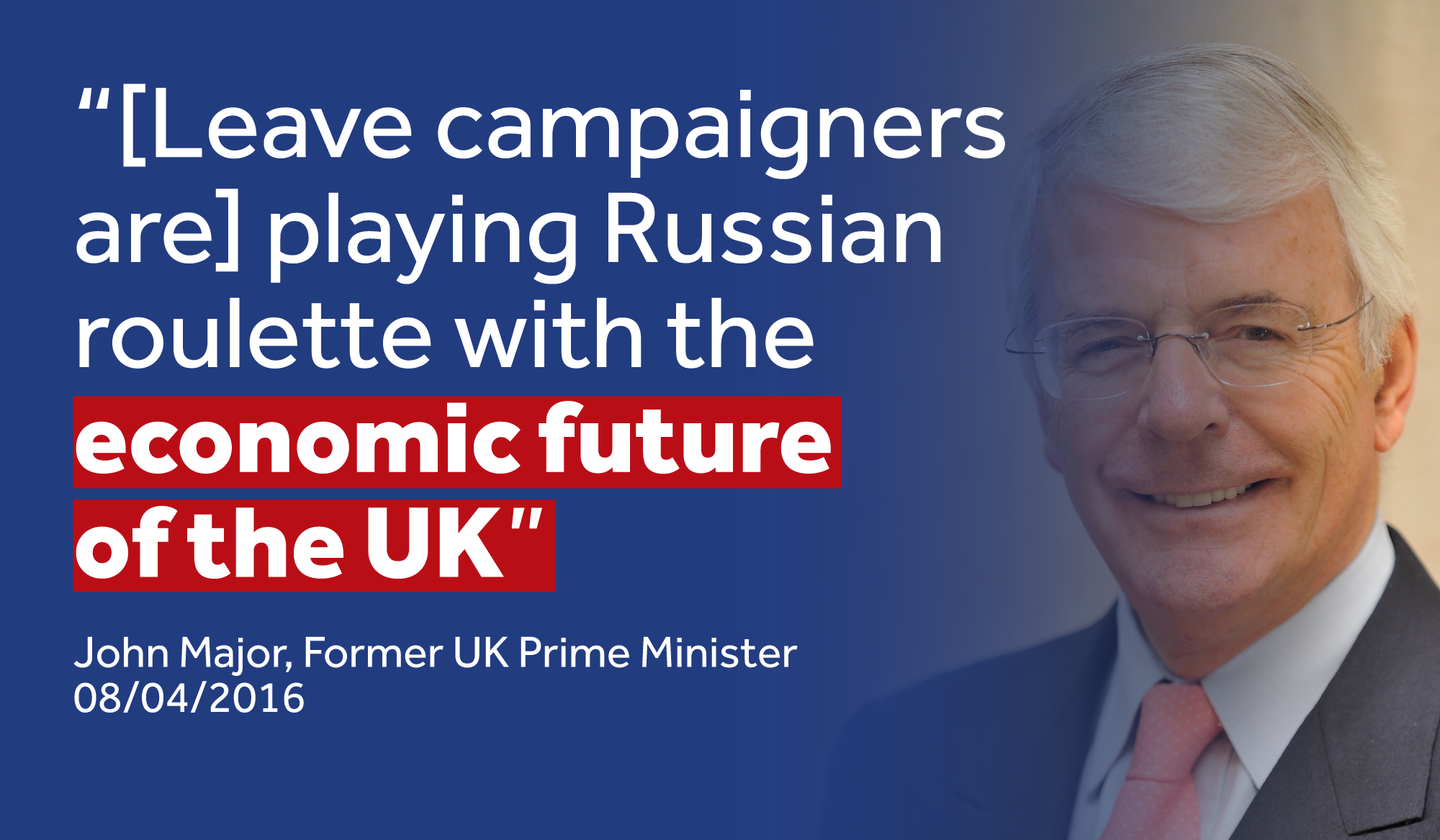 "Almost without exception, the questioners – often investors in the UK – believe it [leaving the EU] is a bad idea."

"I am no starry-eyed European enthusiast. Yet I have not a shred of doubt that the UK should remain a Member of the EU."

"Within the next 20 years – on present policies and, crucially, with continuing full access to the Single Market – the UK is likely – not certain, but likely – to be the biggest economy in Europe:  bigger than Germany.

On issues such as the environment, climate change, internet costs and consumer protection, the UK can best progress – or sometimes, only progress – in unity with our fellow Europeans."

"I am not, and never have been, a Cold War warrior, but we ignore what Russia is doing at our peril.

A united Europe can help penalise and deter her:  a disunited, shrivelled Europe cannot."

"If the UK leaves the EU, the impact will be felt widely – and negatively – not only in the UK but across the EU.

If the UK departs, the EU will lose:

As a result, the EU would be gravely weakened, especially when set against the power of the US and China.  Europe – the cradle of modern civilisation – would bow out of super-power influence."

"Would external investors – China, Japan, America, be more or less likely to invest in the UK if she shrunk to a domestic market of under 65 million, rather than remaining inside a Europe-wide market of over 500 million?

That is not a difficult question to answer.  The UK would lose investment and jobs.  How much, how many, and how soon is difficult to say – but there is no doubt that would happen."

"By leaving the EU, we would be withdrawing from Free Trade Agreements with 53 countries negotiated by the EU on behalf of all their Member States.  These cover 60% of all UK trade.

They will all need re-negotiation:  a tough – and almost certainly lengthy – process.  It is pure self-deception to believe that less than 65 million Britons will get the same favourable terms as 500 million Europeans."

"Our partners are more concerned with multilateral trade agreements, and will see the UK’s need for a speedy bilateral deal as a self-imposed own goal:  we may well have to wait our turn to have any new deals agreed – and it could take many years.

To brush aside such realities is to play Russian roulette with the economic future of the UK."

"The battle now joined over Europe has – on one side – the romantic nostalgia of an “Out” campaign that aches for a past that has long gone, in a world that has moved on.

On the other side those – like me – who wish to remain are not European dreamers:  we are realists who see an edgy, uncomfortable world, and believe that the UK is safer, more secure and better off remaining with our partners in Europe."

"That is why – between now and June – I will be doing all I can to persuade the British people that the consequences of our leaving the EU would be bad for the UK, bad for Europe, and bad for the wider world.

I hope and believe that – on 23 June – good sense will prevail, and we can finally lay this particular ghost to rest.  I have no doubt that, once it is, our international investors will breathe a large sigh of relief … as most definitely will I."