This afternoon, the Shadow Home Secretary Andy Burnham gave a speech in Liverpool in which he outlined what he calls the “patriotic case for Britain remaining in the EU”. 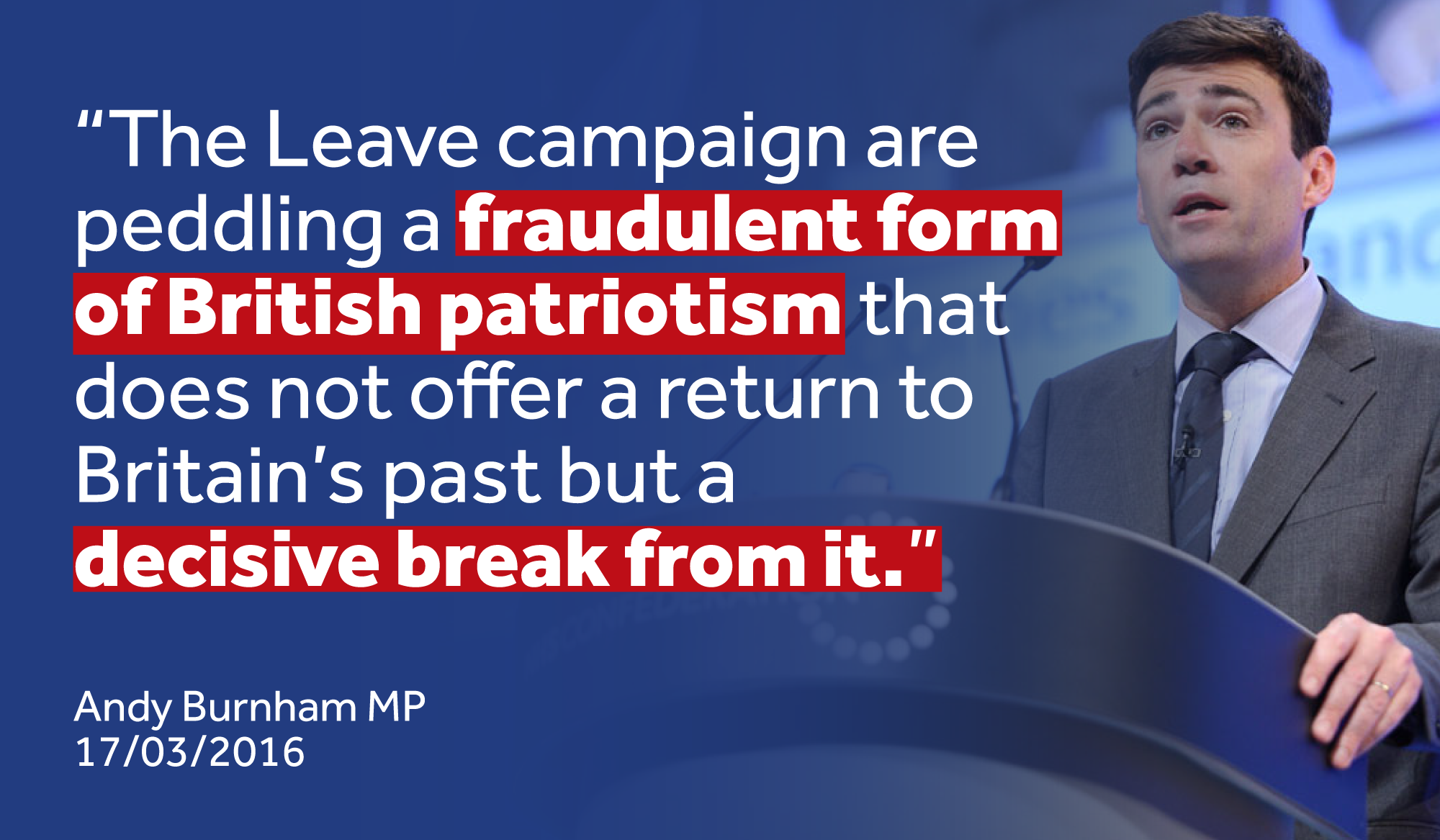 Here are some of the highlights:

"We will never cast a more important vote.

"That's because it will shape what kind of country Britain is, and how we are seen by the rest of the world, for the remainder of the 21st century.

"We have always been an outward-looking nation, highly-engaged in world affairs… It is from that crucial strategic position that Britain has drawn great strength and boosted the national interest.

"If we vote to leave the EU, we would be surrendering that role. We would be instantly weaker, less influential. Why would any true patriot vote for that?

"This brings me to my second argument as to why I think that it would be unpatriotic to vote for Britain to leave the EU: it would leave Britain more vulnerable to external aggression and attack.

To make my point, I pose a simple question: who would be happier if we left the EU - President Obama or President Putin? I don't think there's any doubt about it: there would be weeping in the White House and whooping in the Kremlin.

"That feels to me like a clinching argument for Remain on its own. All of a sudden, Russia would be next door to a weaker EU but an even weaker Britain.

"If Britain was to leave the collective protection of the EU, the economic sanctions we could muster alone would have much less impact, which in turn would mean that military measures would be turned to more frequently. That wouldn't make us or the world safer.

"And how would isolation from Europe help in the fight against the greatest and most urgent threat we face - international terrorism? The simple answer is it wouldn't. It would make it more difficult.

“The Brexiters are peddling a fraudulent form of British patriotism. In fact, if they get their way, it won't be patriotism but nationalism that wins the day.

"Brexit would boost the nascent nationalism that we see here and across Europe. Patriotism is to love who we are and what we have been as a country. Nationalism is to think we are better than everyone else.

"And that in the end is what I think the Leave campaign is about.Far from being about patriotism, Brexit is in fact a recipe for nationalism.

"I say to everyone - don't diminish this great country of ours. Don't let them define how we are seen by the rest of the world.

"Don't let them make us something we're not and have never been - a country which turns it back.

"Let's fight them on the beaches of what it means to be British and reclaim that ground. Let's be true to what we've always stood for and always should.

"Let's honour the memory of those who fought to bring peace to Europe. Vote IN for the Britain we know and love."